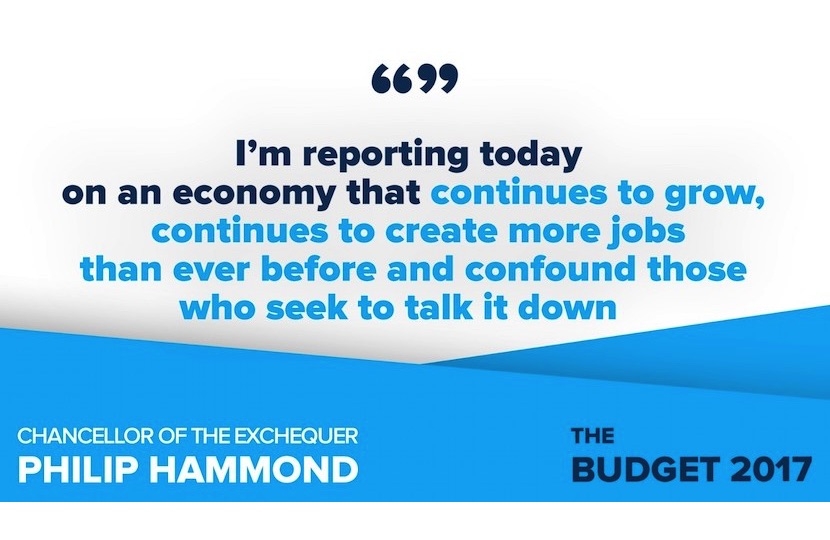 The Chancellor has presented his Budget to Parliament – here’s a summary of what was announced:

1. There are over 32 million people in work – near a record high

The rise in employment over the past year has been driven by full time workers. Unemployment is also at its lowest rate since 1975.

In 2017 growth has remained solid, but slowed slightly at the start of the year. The UK economy is forecast to grow by 1.5% in 2017. It will then grow at a slightly slower rate in the next three years, before picking up in 2021 and 2022.

Inflation is forecast to peak at 3% in the final months of this year, as measured by the Consumer Prices Index (CPI). It will then fall towards the target of 2% over the next year.

2. Borrowing has fallen by three quarters since 2010, but debt is still high

The fall in borrowing means we are adding less to our debt every year. However the UK still has a debt of over £1.7 trillion – around £65,000 for every household in the country.

3. An extra £3 billion to prepare for Brexit over the next two years

The money will make sure the government is ready on day 1 of exit. It will include funding to prepare the border, the future immigration system and new trade relationships.

£3.5 billion will be invested in upgrading NHS buildings and improving care.

95% of first-time buyers who pay stamp duty will benefit.

80% of people buying their first home will pay no stamp duty.

There will be no relief for those buying properties over £500,000.

£15.3 billion new financial support for house building over the next five years – taking the total to at least £44 billion. This includes £1.2 billion for the government to buy land to build more homes, and £2.7 billion for infrastructure that will support housing.

Changes to the planning system will encourage better use of land in cities and towns. This means more homes can be built while protecting the green belt.

7. The National Living Wage and the National Minimum Wage will increase from April 2018

The National Living Wage for those aged 25 and over will increase from £7.50 per hour to £7.83 per hour from April 2018. Over 2 million people are expected to benefit. For a full-time worker, it represents a pay rise of over £600 a year.

9. Fuel duty will remain frozen for an eighth year

In 2018, fuel duty will remain frozen for the eighth year in a row, saving drivers £160 a year on average.

The government will work with the rail industry on a new railcard which will be introduced from spring 2018.

11. Duty on beer, wine, cider and spirits will be frozen

The cost of a pint of beer or cider will be 1p lower than if duty had risen by inflation. The cost of a typical bottle of wine will be 6p cheaper.

Cheap, high-strength cider will be subject to a new band of duty.

12. Duty on tobacco will rise

13. 95% of passengers will not see an increase in their Air Passenger Duty

Air Passenger Duty will be frozen for all economy passengers and all short-haul flights. It will rise for premium fares on long-haul flights, and on private jets.

14. Households applying for Universal Credit will get more upfront support

Households in need who qualify for Universal Credit will be able to access a month’s worth of support within five days, via an interest-free advance, from January 2018. This can be repaid over 12 months.

Claimants will be eligible for Universal Credit from the day they apply, rather than after seven days. Housing Benefit will continue to be paid for two weeks after a Universal Credit claim.

Low-income households in areas where private rents have been rising fastest will receive an extra £280 on average in Housing Benefit or Universal Credit.

The UK will set out rules so that self-driving cars can be tested without a safety operator.

An extra £100 million will go towards helping people buy battery electric cars. The government will also make sure all new homes are built with the right cables for electric car charge points.

The Centre for Data Ethics and Innovation will set standards for the use and ethics of AIand data. This will allow the UK to lead the world in developing practical uses for the technology.

17. More investment in maths and science in schools

Schools will get £600 for every extra pupil who takes A level or Core maths.

£27 million will help improve how maths is taught in 3,000 schools. £49 million will go towards helping students resitting GCSE maths.

£350,000 of extra funding a year will be given to every specialist maths school that is set up across the country.
The number of fully-qualified computer science teachers will also rise from 4,000 to 12,000.

This funding is provided in advance of launching a National Retraining Scheme that will help people get new skills. It will be overseen by the government, the Trades Union Congress (TUC) and the Confederation of British Industry (CBI). They will decide on other areas of the economy where new skills and training courses are needed.

19. A £220 million Clean Air Fund for local areas with the highest air pollution

Local authorities will be able to use this money to help people adapt as steps are taken to reduce air pollution. Possible ways the money could be spent include reducing the cost of public transport for those on low incomes or modernising buses with more energy efficient technology.

The money will come from a temporary rise in Company Car Tax and Vehicle Excise Duty on new diesel cars.

The government will seek views on reducing single-use plastics waste through the tax system and charges. Disposable plastics like coffee cups, toothpaste tubes and polystyrene takeaway boxes damage our environment.

This follows the success of the 5p carrier bag charge, which has reduced the use of plastic bags by 80% in the last two years.

21. Business rates will switch to being increased by the Consumer Price Index (CPI) 2 years earlier than planned

Business Rates will rise by CPI from April 2018. Business rates currently rise by the Retail Price Index (RPI), a different way of measuring inflation which tends to be higher than the CPI.

Business rates revaluations will take place every 3 years, rather than every 5 years, starting after the next revaluation, currently due in 2022.

22. Pubs in England will continue to receive a £1,000 business rates discount next year

Police Scotland and the Scottish Fire and Rescue Service will be able to claim VAT refunds which will save them around £40 million per year.

25. Funding for transport across England

£1.7 billion will go towards improving transport in English cities. Half will be given to Combined Authorities with Mayors, and the rest allocated by a competition.

An extra £337 million will go towards a fleet of new trains on the Tyne & Wear Metro.

An extra £6 million will go towards the Midlands Connect motorway and rail projects.

Transport links along the Cambridge-Milton Keynes-Oxford corridor will be improved by: