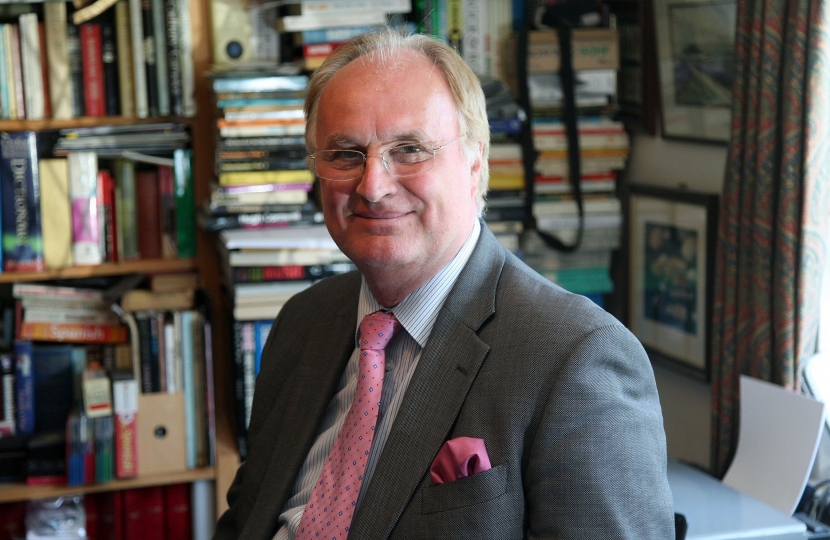 If you stand outside the Crowthorne Library you will see, embedded in the pavement in brass, the words “Community at the Heart of Crowthorne”, words that I submitted to win the competition as the ...most appropriate motto for Crowthorne when the Library and village square was opened.

I have a total commitment to Crowthorne, I am fully involved and am doing everything I can to focus on those issues that will maintain and improve the quality and richness of life in our vibrant Crowthorne community. I have been active in attending meetings with the developers of the TRL site and have pressed them hard for assurances that the impact on local traffic would be taken into consideration and have received their personal commitment that they will spend £16m on road improvements around the site, particularly at the 7 key junctions, to address this issue.

I have attended Parish Council meetings and regularly challenge both the Borough Councillors and the Parish Councillors on a variety of issues. I also regularly meet with and exchange views and experiences with our representatives from Europe, recently meeting our MEP’s Richard Ashworth and Daniel Hannan; Central Government, particularly our local MP, Dr Phillip Lee, but also asking key questions of Theresa May, the Home Secretary, and Michael Gove, the Education Secretary, when the opportunity has arisen; and Borough wide, having a good working relationship with the Leader and most of the Borough Councillors, sharing with them the challenges facing Crowthorne residents.

My opposition candidates talk a lot about what they will do. I am already doing it.

· I am engaged with the Parish Council, while neither of my opponents has been seen at a Parish Council meeting or taken the opportunity to ask any difficult questions.

· I am attending meetings with the developers at TRL and asking questions about the important issues. Have they?

Incidentally, the Labour candidate while bemoaning the fact that the High Street is suffering from the economic downturn and that there is a shortage of housing for young people, in the same paragraph opposes the development of new housing on the derelict and ugly TRL site, which is largely laid to concrete, with a number of empty, and future derelict, 1970’s concrete buildings.

Surely, if this development goes ahead, but I must stress, with the appropriate safeguards and infrastructure in place, it could provide the housing that our children require, and the increase in residents could also bring a much needed shot in the arm to Crowthorne High Street.

· I regularly meet with Borough Councillors and our MP and MEP’s and repeatedly stress the important issues in Crowthorne.

· I don’t spread misinformation. The Lib Dem candidate claims that I went to a Public School and that apparently would be bad for Crowthorne. Neither of these assertions is true. Coming from a working class background, I won a scholarship to an independent charity school, which gave me a deep seated belief in honesty, integrity and fairness, values that I exercise in every aspect of my life.

· He also says that if I were to join my wife on the council that would be bad for the community. Ask anyone, including the Lib Dem candidate himself (who is a fair man), about the exceptional work that my wife, Cllr Tina McKenzie-Boyle, has done for the community of Crowthorne over the years that she has been on the Council. Have you visited the Crowthorne Station recently and seen the improvements she has engendered by working closely with First Great Western Railways and the local schools to enhance the feeling of civic pride that the station now presents to all who arrive by train. I’m sure you will share the view that my joining and working with her can only be good for Crowthorne. I am very proud of what my wife has achieved for the residents of Crowthorne, and I wish to work with her to do even more.