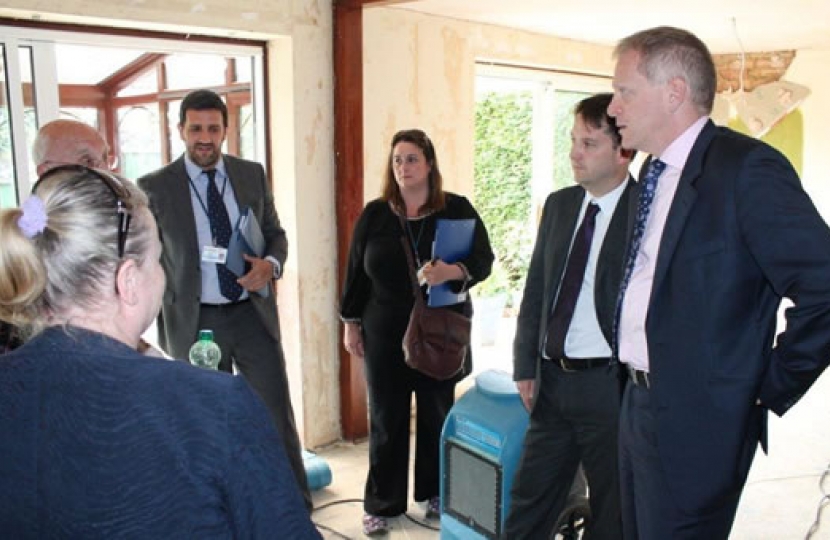 Dr Phillip Lee, Bracknell’s MP, met with representatives of South East Water following a burst water main that has affected hundreds of Bracknell residents. Dr Lee held a meeting with Douglas Whitfield, Head of Operations, and Steve Andrews, Head of Customer Services on Friday 27th also visited residents whose homes have been affected by flooding in the Claverdon area of Bracknell.

The water main burst at about 3.20pm on Wednesday 18th were initially affected by either an interruption to their water supply or low water pressure. Seven properties were also flooded by approximately two feet of water. Ringmead was closed from Hanworth Road to Birch Hill whilst the clean-up operation was carried out. Firefighters from Bracknell and Wokingham were called to the scene to help pump out the water. This is the second incident of a burst water main in the area since March, and the third occurrence in just over a year.

Dr Lee has demanded answers from South East Water, specifically as to why the water main burst for a second time in such short succession, and what urgent measures South East Water will take to prevent this from occurring again. Dr Lee has sought assurance that residents whose homes have been damaged will receive sufficient compensation. He has also insisted that South East Water ensure that those who were forced to move out of their homes will be moved back as soon as possible.

Dr Lee met with 77 year-old resident John and Dymphna Slade was forced to move out of their home into temporary accommodation as a result of the flooding in March. They had been expecting to move back in August, a plan which has seemingly been scuppered by the most recent incident. Dr Lee also spoke with Paul Jordan, who along with his heavily pregnant wife Viki, have been severely affected by water damage at their home in Claverdon.

Dr Lee has been assured by South East Water that their engineers are currently working to fast track the upgrade of a 235 metre section of pipeline between the junctions of Hanworth Road and Birch Hill Road, to prevent this happening again in the future.

Dr Lee commented: “It is quite extraordinary that the water main has burst for the second time in just three months. The disruption and distress caused to residents must be addressed with the utmost urgency. I am in regular contact with South East Water, and will continue to monitor this situation closely to ensure that a timely and comprehensive solution is secured.”