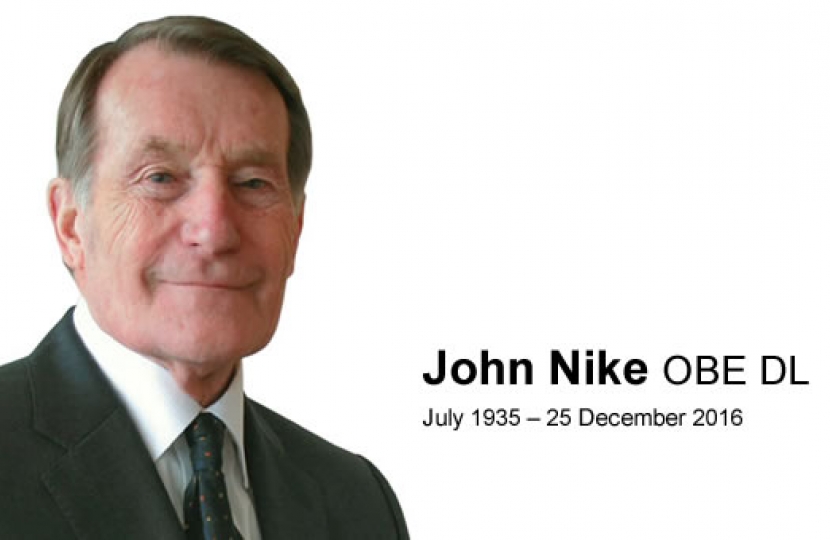 John Nike OBE passed away at the age of 81 on December 25 at the Royal Berkshire Hospital with his wife Sue by his side. “It is with sadness that I have to announce that my husband John died peacefully on Christmas Day,” said Sue.

I was deeply saddened to hear the news of John Nike’s passing, and although I knew he had been ill for some time am also deeply shocked, as when I met him only last month he still displayed his usual determination and drive.

John had been a good friend to me personally over the past few years, giving me the benefit of his extensive knowledge of the area when I first became Bracknell’s MP. The town has also lost a good friend. He loved this area. In a time when returning something to the community is on the wane, John stood out like a beacon. Indeed, there can be few individuals who have not benefited, either directly or indirectly, from his generosity to the area.

My thoughts today are with his wife Sue and his family who I would like to thank for ‘lending’ us so much of John over the years.

John Nike OBE DL, and Freeman of the Borough of Bracknell Forest. It has been an honour and a privilege to have known and worked with this man, and to count him and his wonderful family as friends. He was one of the best friends that Bracknell Forest has ever had. He will be sorely missed, and remembered forever. Our immediate thoughts and prayers are with his family at this time of great loss.

Our hearts are saddened. John Nike contributed so much to Bracknell and touched so many lives. He was a true gentleman, entrepreneur and philanthropist. He will be missed. Our deepest sympathies goes out to his wonderful family.

John also served as a Director of the 33 Group where his wisdom and experience as a successful senior businessman was invaluable beyond price. John was also a personal friend, was a lovely man and we consider it a privilege and honour to have known him and worked with him.

We send our heartfelt thoughts to Sue at this sad time.