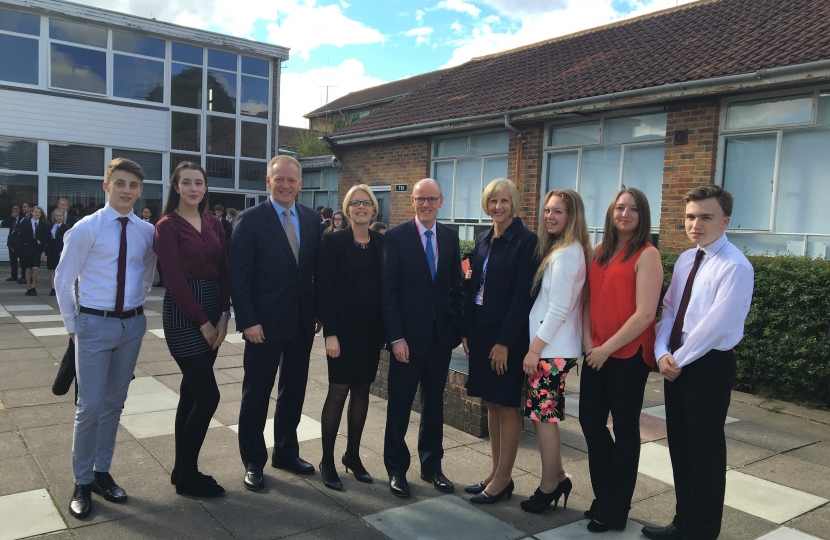 The first non-faith school in Bracknell to achieve Academy status, the Brakenhale Academy, welcomed Schools Minister Nick Gibb MP on 20th September for a tour of the facility.

Accompanied by local MP, Dr Phillip Lee, Mr Gibb was shown around the school by head teacher Jane Coley.  Ms Coley, who took over the role in April 2015 after the school had been rated by rated by OFSTED as requiring improvement, was also accompanied by the Chair of Local Governing Body, Karen Roche. The school has made rapid improvements in the last 18 months and in April this year converted to academy status under the sponsorship of the Greenshaw Learning Trust.

Following his visit, the Minister was full of praise for what had been achieved in such a short space of time:

“I was pleased to visit the Brakenhale Academy at the invitation of Bracknell’s MP, Dr Phillip Lee. The school is improving quickly following a change in its leadership team and a renewed focus on high academic standards.”

Dr Lee highlighted that the changes brought about over the last 18 months reflects also upon the wider Bracknell area:

“The amazing work being done at Brakenhale by Jane Coley and her wonderful team is an enormous credit to Bracknell and deserves all the praise it gets.”