James Alexander was elected to represent Great Hollands South in the election on the Bracknell Town Council on 6 May 2022.

"My family and I have lived in Bracknell for 8 years, moving from Wokingham, after arriving in the area in 1996 from my native Motherwell. As a father of five children, we chose Bracknell to raise our family for several key reasons:

I believe that Bracknell is a great place for a family to grow and flourish and I hope to see that all those benefits are sustained and enhanced into the future.

As an armed forces veteran, I have served our country for 10 years, across the globe, on peacekeeping duties, humanitarian missions and operational conflicts. I have tremendous pride in the work carried out by our men and women of the Armed Forces. It was a privilege and an honour to carry out those duties.

I have carried over that sense of duty into my civilian life, supporting and championing several charities and community initiatives such as homeless and wounded veteran charities, cancer relief and Air Ambulance appeals.

I now wish to take more direct, active involvement in the functioning of our town, supporting our community and helping to ensure Bracknell has a great future by becoming the Bracknell Town Councillor for Great Hollands South." 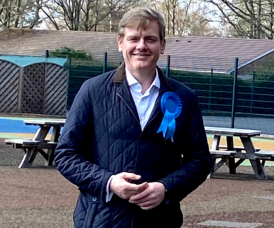