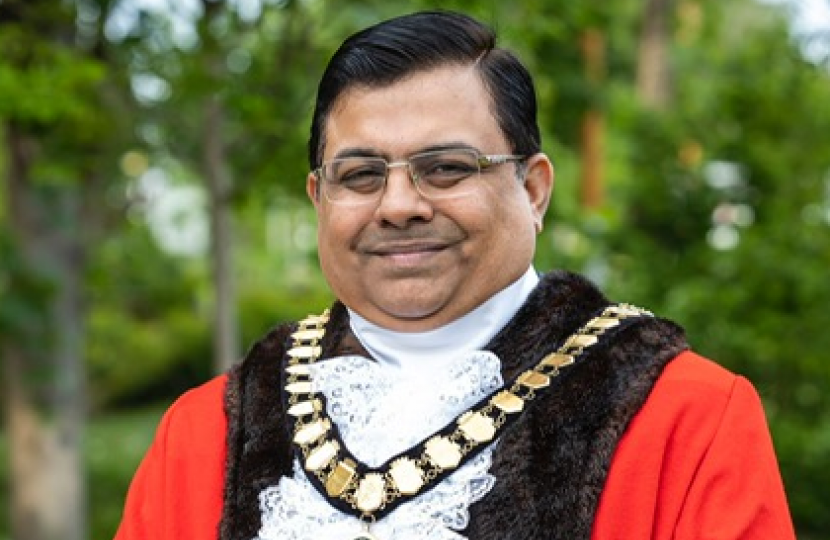 A warm welcome was given to Cllr Ankur Shiv Bhandari, as he became the new Mayor of Bracknell Forest at the Annual Meeting of the Council on Wednesday, 18 May. Cllr Bhandari is the first person of Indian-origin and also the first person of colour to have taken this position.

Cllr Bhandari, who has represented Binfield with Warfield ward since 2019, was elected during the mayor-making part of the meeting.  He will now take over as first citizen of Bracknell Forest from Cllr Ash Merry, who has been Mayor since May 2020.

Ankur, his wife and two children have considered Bracknell home for 17 years.  He is an entrepreneur, running businesses in fields of Shopper Marketing and Digital-led training. Previously Ankur has held senior positions with corporates such as Procter & Gamble, Accenture and WPP and is also a Liveryman of the Worshipful Company of Marketors. Ankur has worked around the world in more than 50 countries and holds an MBA, a post graduate teaching qualification and is about to complete his Master’s degree in law.

He is looking forward to engaging with the voluntary groups, businesses and schools across the Borough and recognising them, and individuals, for the significant contribution made by them to the community. He will be accompanied by the Mayoress, Rishi Bhandari.

The new Mayor said "I am looking forward to the year ahead and carrying out mayoral duties across the borough. In particular, I am looking forward to getting out into our local communities and spreading the message of wellbeing, happiness and saying thanks. I will be particularly focusing on opportunities for young people and businesses in the borough and will try to further the laurels of Bracknell as the “ Borough of Opportunity”.

The outgoing Mayor, Councillor Ash Merry, said: ‘It has been an honour and a privilege to be Mayor of this very special Borough for the past two years. Covid has meant that we have had to do things differently,  but one thing is for sure ‘the bigger the challenge, the bigger the hearts here in Bracknell Forest!’ Thank you to everyone who has helped others and made a difference when it was most needed. I send Ankur, our new Mayor, my best wishes in this, Her Majesty’s Platinum Jubilee Year.

Transport Secretary Grant Shapps on building a railway fit for the future.